Ruth Castel-Branco from the University of the Witwatersrand about informal economy, lack of social protection and a possible way out by a global strategy of redistribution. 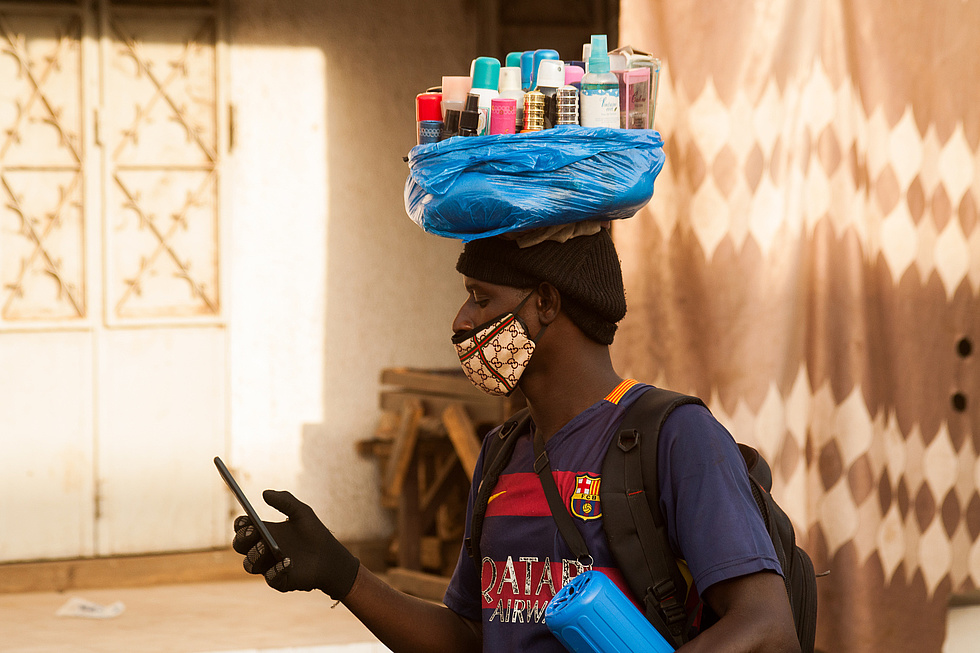 Like a magnifying glass, the COVID Pandemic has exposed the fragility of global capitalism and the systemic violence it produces. The speed with which the virus has spread is dizzying, its impact on human life overwhelming, and even the most robust healthcare systems have buckled under pressure from this crown-shaped killer. With healthcare systems debilitated by decades of structural adjustment, governments across Africa were quick to declare national lockdowns. Although this strategy has proven effective in slowing the viral spread and buying time, it has come at an unimaginable cost.

The ILO estimates that more than 80% of the world’s workers are under a full or partial lockdown. Unemployment is rapidly rising, the employed are laboring under increasingly precarious conditions, and the majority of the world’s workers in the informal economy have been left high and dry. In Africa, less than a fifth of the population has access to social protection—in some countries, much less. As leaders struggle to respond to the contradictions raised by the lockdown, universal basic income has garnered increasing attention. Indeed, even Pope Francis —the head of a Church whose teachings on the dignity of work and evilness of sloth, have been manipulated by elites to deflect from redistributive demands since time immemorial—is backing it.

Universal basic income is a publicly funded unconditional cash transfer paid regularly to all regardless of income or employment. Progressive proposals set the value of the transfer at 125% of the individual poverty line. They conceive of it as additional to, rather than a replacement for, existing forms of welfare provisioning; and recognize that welfare provisioning is part of a broader set of policies aimed at increasing the social wage and improving working conditions. Conservative proponents on the other hand, have latched onto universal basic income to drive forth a politics of austerity. The value of the transfer is generally insufficient to meet reproductive needs, and frequently coupled with proposals to commodify public services and flexibilise the labor market. As with any policy, the devil is in the details.

Across the African continent, there has been a gradual expansion of social welfare coverage. However, welfare systems remain sharply fragmented, with cash transfers generally targeted at the poorest of the deserving poor, conditional on some form of coercive behavior modification, and insignificant in value. A progressive universal basic income could reverse this trend and strengthen welfare provisioning. However, for spectators across Africa, such a proposal amounts to little more than a lullaby to put the ox to sleep. Following the launch of the Mozambican civil society position document on the State of Emergency, which proposed the expansion of welfare albeit not universal basic income, many were skeptical: How will the state pay for it? Is it realistic, given widespread corruption? Is it implementable? Is it desirable? These are legitimate questions.

Ultimately, for low-income countries like Mozambique, the introduction of universal basic income would have to be part of a global strategy of redistribution. Indeed, some proponents  argue that in the face of automation, massive overproduction and ecological crisis global universal basic income ensures that everyone gets their fair share. Such a proposal could be funded by socializing the returns to global capital and paying the world’s population a dividend administered by a global public trust. As Varoufakis stresses, the socialization of the returns to capital is distinct from taxation, which disproportionately burdens the world’s workers. Of course, for such a proposal to come to fruition, progressive forces must claw back universal basic income from conservatives and advance a global politics of redistribution that counters rising authoritarian nationalism.

Importantly, a global universal basic dividend is not a magic bullet response to the violence of inequality laid bare by the COVID Pandemic. While such a dividend may transform the world’s population into shareholders of capitalist accumulation, classical political economy questions remain relevant. What should be produced? How should it be produced? And for whom? After all, without food and other material goods, dividend recipients will have nothing to buy but inflation. Rethinking redistribution thus requires reclaiming production. And history has shown that it is precisely when workers, in the broadest conception of the word, are most powerful, that such change is possible.