An analysis of the monopoly on the use of force in ten East Asian countries finds diverse state, non-state and hybrid security actors competing for power. 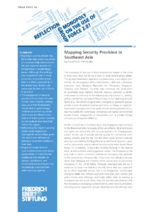