The next European Parliament election will be taking place between 23 and 26 May 2019. How are political parties of the political groups in the European Parliament positioned? How do they react to changes in the society and with which topics do they position themselves where in the political debate?
In this overview of strategy debates of political parties in selected European (Germany, France, Hungary, the Netherlands, Sweden and United Kingdom), the authors strive to present political analyses not in text form, but graphically and pointedly. We hope this product contributes to a constructive discussion.

IMPORTANT: The cases of Hungary and the United Kingdom as well as more detailed maps of all six country cases will be updated after the European Election.

Polarisation in the political landscapes in various European countries

Citizens of twenty-eight European Union (EU) member-states will vote in the 2019 European Parliament elections between May 23 and 26. Even though the European Parliament is the only directly elected institution in the EU and voting in this election is key to shaping the bloc’s future, many voters across Europe will likely abstain. Although politicians across the political spectrum have argued that these are elections of crucial importance, given the turbulent processes that are reshaping the power-balance in European Parliament, many voters are not convinced and voter enthusiasm remains low across the European continent.

Multiple polls suggest that moderate parties on the centre-left and centre-right are likely to lose their combined majority for the first time in 25 years. Social democrats have suffered in national elections major losses in France, Germany, the Netherlands and Italy, while years of austerity and rising opposition towards immigration have boosted Eurosceptics to the detriment of moderate conservatives. The populist far right managed to win the 2014 European Parliament elections in several countries and is now expected to gain further support. Should right-wing parties find a common ground, they might be able to disrupt the workings of the EU and its political direction. However, internal divisions seem to run deep, and a common front of all Eurosceptic parties is unlikely.

Brexit has propelled anti-EU nationalists across the continent, most of whom tend to frame this election as a referendum on the Union. Indeed, deepening societal divisions and political polarisation are common in all regions of the EU. This polarisation is clearly visible in the political landscapes displaying the positions of parties in various European countries.

To map these parties, we first analysed what are the most salient issues in these election. The major political debate issues in this campaign range across a multitude of topics such as climate change, government spending, immigration, and the rule of law. Naturally, the far-right see immigration and (further) European integration as issues of antagonism, undermining the importance of environmental matters. Parties on the progressive side of the political spectrum attribute the greatest of importance to the climate, labour rights and public investment, while mainstream conservatives put an emphasis on security and the rule of law.

On the left we see more Euro-enthusiasm, with social democratic parties consistently positioned towards the progressive pro-EU pole of the political landscape, closely clustered together with other progressive actors (the radical left and environmental parties). The Party of European Socialists (PES) and the European Greens actually share substantial commonality in their outlook on European integration - basically arguing for a greener and more just European Union.

It has to be noted, however, that the main blocks are also far from cohesive. Within PES, some social democrats have staunchly pro-European positions (Germany, the Netherlands), while in Sweden the entire political establishment has historically been much more ambivalent towards European integration. While the Swedish social democrats are fervent supporters of a common EU foreign policy, they are opposed to further economic integration and the introduction of the Euro in particular.

What becomes immediately apparent by looking at the landscapes of political competition in France and Sweden, is that the party systems in these countries have been marred by political polarisation: parties cluster on either far to the left, or tend strongly towards the socially progressive or socially conservative side of the landscape. The political system is somewhat less polarized in the Netherlands and Germany, where moderate Christian democratic parties are positioned right of centre, and have a rather balanced position on the EU dimension.

While Christian democratic parties have not been immune to tendencies if radicalisation, in particular on issues regarding immigration, some members of the European People’s Party (EPP) still demonstrate moderation and cross the political isles in national party systems. The French Republicans and the Swedish Moderates are less moderate and have adopted staunchly right-wing, pro-market economic stances, supporting further austerity. With regard to European integration, the large majority of EPP members – and certainly in the countries analysed here - have a rather moderate position. They are certainly not Euro-enthusiasts, but overall still support the European project.

How the Alliance of Liberals and Democrats for Europe (ALDE) will regroup is still a bit unclear, as French President Emmanuel Macron seems keen on becoming the pro-European force, with his critical stance towards the UK during the Brexit process, and his party’s unorthodox strategy of reaching out to Europeans in all member-states in an attempt to thwart right-wing nationalists.

Nevertheless, the liberal bloc is far from unified: next to staunchly pro-EU parties such as Macron’s Renaissance, the German Liberals (FDP) and the Dutch Democrats 66 (D66), there are crucial actors that would like to see a slower pace of European integration and enlargement, while not being fully opposed to these processes. Such is the case of the Dutch incumbent People’s Party for Freedom and Democracy (VVD). While ALDE has historically been comprised of left-leaning social liberals, and more conservative oriented neo-liberals, it remains to be seen how these multifaceted opinions towards the EU will affect the European Liberals in the future.

The Party of European Greens and of the European Socialists (PES) actually share substantial commonality in their outlook on European integration - basically arguing for a greener and more just European Union. An exception are the Swedish Greens who are rather ambivalent in their stances towards European integration, contrary to other European environmentalist parties.

Fragmentation of the European Parliament may well lead to the Greens joining the three larger groups (EPP, ALDE and PES) in a joint socially progressive coalition, facing the socially conservative left and right. However, there is much EU-chagrin within the Green block, which might render collaboration with them problematic for the three major party groups.

Parties in the far-left bloc (GUE/NGL), are also expected to gain seats in the 2019 election. While they have maintained their rhetoric of changing Europe from within, by shifting EU policies towards social investment and welfare, rather than budgetary discipline and austerity, radical left parties are still seen as dangerous for the EU. Many observers point out to the possibility of a union between all Eurosceptic parties, yet it is unlikely that the far-left parties will be willing to collaborate with their ideological antagonists on the right.

Even more internal division and strife can be seen in the Eurosceptic party block. Our mapping shows that these parties are positioned all over the socially conservative side of the political spectrum. Eurosceptics will face substantial obstacles in their attempt of unification. Some are close friends of the Russian government (FPÖ and Salvini’s Lega), while other abhor Putin (like, for instance, PiS in Poland). The far-right could perhaps find a common pro-business, fiscal conservative agenda, yet some of its representatives actually use staunch rhetoric against big business. The leader of the British Brexit party – Nigel Farage, for example, has nearly conspiratorial ideas about banks and multinationals - something that could be highly problematic for Eurosceptic that are in government and are often closely associated with big business. While most parties on the far right are, pro-business fiscal conservatives, some have adopted more moderate, or even left-leaning, economic stances in the light of the strong working-class support behind their parties. They promise both cultural and economic protection - something that is difficult to square with pro-business policy positions. Such an ambivalent position of welfare chauvinism is also defended by the French National Rally (Rassemblement National), yet might not be coherent enough to pass any reality-check. In fact, this rather populist agenda may not be as easy to implement as is often assumed by the frontmen of these parties. Other long-standing Eurosceptcs are weakened by new national-populist parties, such as the Dutch Freedom Party (PVV) of Geert Wilders, that now seems to be fast-tracked to irrelevance with the rise of Forum for Democracy of newcomer Thierry Baudet.

How were the graphs created?

The graphs above display the positions the main political parties in France, Germany, Hungary, the Netherlands and Sweden, on a two-dimensional spatial map, constructed on the basis of 30 salient issue statements (19 issue statements in France) related to strongly relevant policy issues in the current political debate. The most salient issues were selected by a team of academics and experts, based on a close examination of the parties' platforms and political (media) discourse. Each of the statements pertains to a policy proposal that can be framed as either “left-“ or “right-wing”, “socially progressive” or “socially conservative”. The statement answers are 5-point scales with answer categories ranging from “completely disagree”, to “disagree” to “neutral” to “agree” to “completely agree”. The positions of parties on these statements are coded in accordance with their official stances on the issues, as expressed by their published policies, campaign documents and media appearances. All major parties were also asked to position themselves and provide excerpts from their party manifesto or other formal documentation. These self-placements of parties were subsequently compared with the expert coding. Discrepancies were communicated to parties over several rounds until there was full clarity and authorisation of their final issue positions.

The spatial map is constructed on the basis of the aggregate positions of the parties on the two dimensions (the left-right dimension and the social progressive-conservative dimension). The precise party position is located in the centres of the ellipses. The ellipses represent the standard deviations of the party answers to all statements used to construct each axis. Thus, parties in favour of both left- and right-wing policy proposals have a wider ellipse on the left-right axis; parties in favour of both social progressive and social conservative policy proposals have a lengthier ellipse on the social progressive-conservative axis.

The parties are positioned on the basis of VAA data. The German VAA-Wahlkompas is accessible via this link: https://europa.wahl-kompass.de/.

Who realised the Strategy debates for the European Election 2019?

The International Policy Analysis Department is working on key issues of European and international politics, economy and society. The aim is to develop policy recommendations and scenarios from a perspective of social democracy. 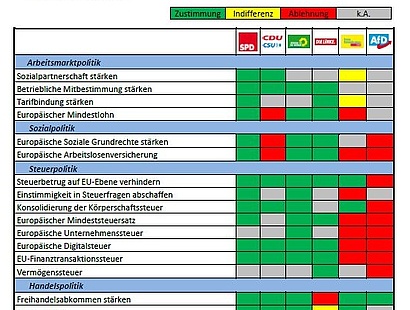