In 2014, the Friedrich-Ebert-Stiftung (FES) set up the Global Reflection Group “Monopoly on the use of force 2.0?” as an initiative to raise awareness of what the current international security order is – theoretically – based on: national monopolies on the use of force.

The group analysed the current state of these monopolies and discussed progressive policy options that safeguard both human security and a just international order.

The group's final report "Providing Security in Times of Uncertainty" suggests a "two-pronged approach": strengthen the state monopoly on the legitimate use of force or, where appropriate, initiate a process to meld the growing number of fragmented security providers into a regulated and coordinated security architecture that protects citizens in an inclusive and accountable way.

Public discussions about peace and security policies are mostly driven by current events. Different and urgent threats to peace and security frequently require immediate, effective responses. Those mostly short-term or ad hoc policies and approaches include armistices, sanctions against warring parties, delivery of weapons and military interventions. Irrespective of their perceived short-term effectiveness, they often have serious, long-term consequences for the structural setup of the institutions in charge of force and violence.

The State Monopoly on the Use of Force

Ideally, the state guarantees the security of its citizens, both internally and externally. This is the core of what the so-called “state monopoly of force”, a concept that was developed by European philosophers from the 16th Century onwards. However, a monopoly of force has only been implemented in some states and sometimes even appears to be more of an exception to the rule. Nevertheless, a large number of fragile and less developed states worldwide aims at establishing a functioning monopoly on the use of force.

The assumption that national monopolies on the use of force exist and are comparable to each other is at the core of International Relations Theory. Even though notions of what ‘security’ encompasses and ‘whose’ security we talk about changed significantly over time, nation states remain to be perceived as the main providers of security. The international legal and security order is based on this presupposition, too. But security practices in the 21st century often contradict this ideal.

Over the last 50 years, peace and security policies have changed significantly and new challenges and threats have come to the fore on the organizational, social, technological, legal and economic level. Taken together, they have serious implications for the 'sovereign nation state' that the UN Charta envisaged and call the traditional notion of a monopoly of force into question. While broader concepts of security emerged, international interventions increased, security was increasingly privatized and commercialized, non-state actors filled spaces where states were unable to provide for security, terrorism became an increasingly wide-spread phenomenon and various technological innovations altered the patterns of security provisions dramatically, including the development of armed drones. Furthermore, especially transnational challenges can no longer be effectively tackled at the national level alone.

As a logical consequence of these trends, conventional accounts of the monopoly of force concept should be critically examined and appropriately revised. We can no longer afford to ignore a reality that increasingly puts into question some of the fundamental assumptions of how security is legitimately organized. 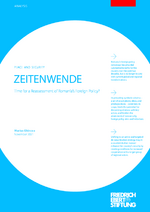 Time for a reassessment of Romaniaʿs foreign policy?
Bucharest, 2021 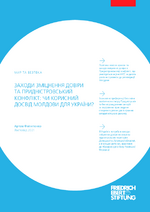 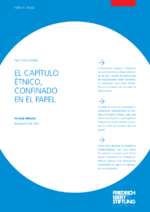