Latin America is one of the most violent regions of the world due to intra-state conflict and high homicide rates. According to Francine Jácome, the region needs effectively prevent and resolve violent conflicts and deal with transnational organized crime as well. 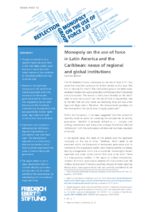 Think Piece No. 15: A terminal threat to state monopoly on the use of force? The international search for answers to combating terrorism and violent extremism

Terrorism and Violent Extremism do pose real threats, but according to Ann L. Phillips, they have been exaggerated and misdiagnosed. The only durable…

Francine Jácome provides an overview of the multifaceted security landscape in Latin America. While acknowledging regional differences and the…

Think Piece No. 3: Tendencies to Rearrange, Dismantle, and Destroy the Monopoly on the Use of Force – Causes, Consequences, and Types

Herbert Wulf identifies the privatization of security services as one of the main threats for the monopoly on the use of force. He traces the reasons…