Terrorism and Violent Extremism do pose real threats, but according to Ann L. Phillips, they have been exaggerated and misdiagnosed. The only durable antidote is one which emphasizes civilian support for local reform efforts. 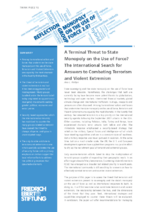 A terminal threat to state monopoly on the use of force?

the international search for answers to combating terrorism and violent extremism
Berlin, 2016

Think Piece 17: The Place of Intelligence in the State's Monopoly on the Legitimate Use of Force

Intelligence agencies can be integral to how the state provides for national and human security, but they may also play a key role in securing…

Think Piece No. 16: Monopoly on the use of force in Latin America and the Caribbean

Latin America is one of the most violent regions of the world due to intra-state conflict and high homicide rates. According to Francine Jácome, the…