According to Ann L. Phillips, identity politics are the driving force behind fragmentation, undermine the nation-state and threaten order and predictability. She suggests strengthening the capacity of governments and societies to negotiate solutions to problems and disagreements. 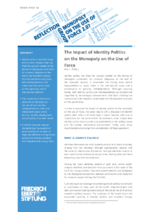