State actors are to some extend responsible for the rise of ethnic separatism and religious extremism in Southeast Asia, with negative consequences for human security. 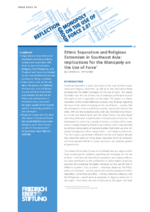 Implications for the monopoly on the use of force
Berlin, 2017