In the banking sector, technological innovation, automation and restructuring have had a drastic impact: computers and algorithms have replaced physical, face-to-face customer contact and led to massive job losses worldwide.

Contrary to expectations, however, this has not led to the demise of trade unions in the banking sector. Instead, they have gained in importance.

The Romanian and Uruguayan banking unions show why: they recognised these structural changes early on and articulated the need for retraining and skills acquisition in the digital world as their core demands.

By negotiating collective agreements with banks and financial services providers for further training and retraining, they ensured the continued employment of older and female workers in particular.

In Romania, the union was even able to negotiate the first sector-wide collective agreement after the wage bargaining system was dissolved by the "Troika policy".

The Uruguayan union has also introduced an innovative financing model for the pension fund, the so-called "robot tax", which provides social security for workers.

Both examples clearly show that trade unions matter when it comes to shaping the industry in times of profound and rapid change - an industry that has come under pressure over the last decade because of its role in economic and financial crises. 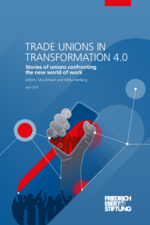 Stories of unions confronting the new world of work
Berlin, 2021

If you don't have time to read all the publications but still want to find out about the keyresults, we recommend the Short Stories Booklet: in it you will find the essence of the results presented in short articles.

Back to bargaining in banking (en)

Banking on training and pensions (en)

The "Trade Unions in Transformation 4.0" project was initiated by FES with the aim of better understanding the representation of workers' interests in digital capitalism. The project sheds light on how trade unions and new organisations of workers are mobilising their power resources to face and shape the emerging new world of work. FES wants to contribute to the strategy-building among workers and trade unions and is offering its cooperation.

The project highlights how workers and unions are shaping change in the industrial sectors, how tech workers are becoming part of the workers' movement, how transport workers are opposing the restructuring of their sector through platforms, and what digital tools and apps unions are developing to expand their power in the digital economy.