According to the World Bank, USD 20 to 40 billion is stolen through corruption from the Global South and is hidden overseas. In their FES Policy Analysis "The Stolen Wealth - Opportunities and Challenges for Civil Society in Asset Recovery", Agatino Camarda and Jackson Oldfield look at five of the most important current cases of cross-border corruption. They outline how civil society can contribute to the tracing of stolen assets, can ensure the transparent and accountable use of assets once they are returned, and can help the public make sense of the complexities involved. We talked with them about their findings.

FES: Why has the topic of asset recovery gained visibility?

Agatino Camarda and Jackson Oldfield: The recovery of assets stolen through corruption has existed in the international community for many decades, but in the past few years more and more people have started realising how important it is. Asset recovery is a fundamental step to bring justice and compensate the victims of corruption and is increasingly recognised as one of the main tools to fight corruption and illicit financial flows globally. Governments of developing countries have started pushing their counterparts from Europe and the US to assist them in returning the money that belongs to them and is hidden in the Global North thanks to the secrecy of financial systems. Further, civil society organisations worldwide have started demanding that asset recovery processes become more transparent and accountable.

Why did you choose these case studies?

With this research, we chose to look at countries where there are important and interesting cases of corruption across borders, where large amounts of money has been stolen and moved abroad.  We chose to pick a mix of countries that represent cases that are more and less publicly known. On one side, Nigeria and Malaysia have received a lot of attention in the past years with the cases of former dictator Abacha and the so-called 1MDB case; on the other, Moldova, Mozambique and Mexico are less known in the international community, although huge amounts of public money have been stolen by public officials. With this study, we also wanted to look at the potential role NGOs and journalists have in raising awareness and investigating these cases, and these five countries all had promising initiatives.

Which regional and international initiatives are relevant for asset recovery?

The main reference tool for asset recovery at the international level is the UN Convention against Corruption, which has an entire chapter dedicated to asset recovery and includes today 186 state parties. Another important tool is the UN Sustainable Development Goal 16, specifically goal 16.4, which aims to reduce illicit financial flows and strengthen the recovery and return of stolen assets by 2030. To facilitate international cooperation, the UN Office on Drugs and Crime and the World Bank also created the Stolen Asset Recovery Initiative – StAR - which has organised various regional conferences on this topic and provides research and data about asset recovery cases worldwide. The EU is also increasingly becoming an important actor trying to harmonise procedures for asset confiscation and return among EU countries and to put in place preventative measure to fight money laundering and cross-border corruption.

How can these initiatives support civil society?

For civil society organisations, the UN Convention against Corruption is a key instrument to advocate for efficient asset recovery processes and for anti-corruption work in general: it sets standards and defines rule on how states should cooperate, which can be used to hold governments to account on their actions. Similarly, Sustainable Development Goal 16 is a very important tool to build campaigns raising awareness worldwide on the problem of illicit financial flows and on asset recovery. The StAR initiative, on the other side, has provided civil society and practitioners with useful manuals and a large case database that can be used for further research and investigations. Beyond these, civil society is doing a lot of work globally on its own to set the standards it thinks should be in place to ensure the accountable and transparent return of public funds in a way that supports anti-corruption work and supports the victims of grand corruption.

The interview was conducted by Sarah Ganter (FES). 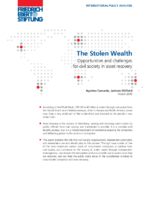 Opportunities and challenges for civil society in asset recovery
Berlin, 2019