In discussions about European and Transatlantic Security Policy, the crises from 2014 led to a focus-shift back towards the relationship of Europe with Russia and the threats and risks from “the East”.

At the same time, there is a continued thread in the debate not to lose sight of the threats and challenges which Europe faces in its southern neighborhood. Yet, the geopolitically connotated references to the “Southern Flank” of NATO or the “Southern Neighbourhood” of the EU seldom is unpacked and discussions seem to oscillate rather vaguely around notions of terrorism, state fragility and failure, authoritarianism as well as refugee routes.

With this publication series,  FES wants to help shed light on the security risks, challenges and opportunities in the EU’s southern neighbourhood, as seen from the perspective of both southern EU member states, as well as states from the southern European neighbourhood itself.

Against the background of the recent 25 years anniversary of the Barcelona process it shall feed into discussions about how to reenergize the Mediterranean partnership as well. 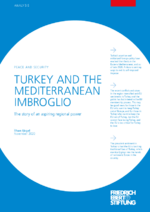 Turkey and the Mediterranean imbroglio

The story of an aspiring regional power
Berlin, 2021 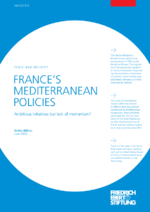 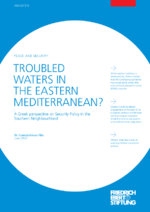 Troubled waters in the Eastern Mediterranean?

A Greek perspective on security policy in the Southern neighbourhood
Berlin, 2020 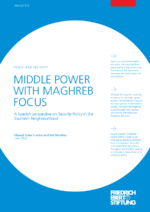 A Spanish perspective on security policy in the Southern neighbourhood
Berlin, 2020 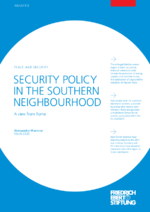