The EU should listen more carefully to citizens of the countries in the region as discussed on a high-ranking meeting on peace and security in the Horn of Africa. 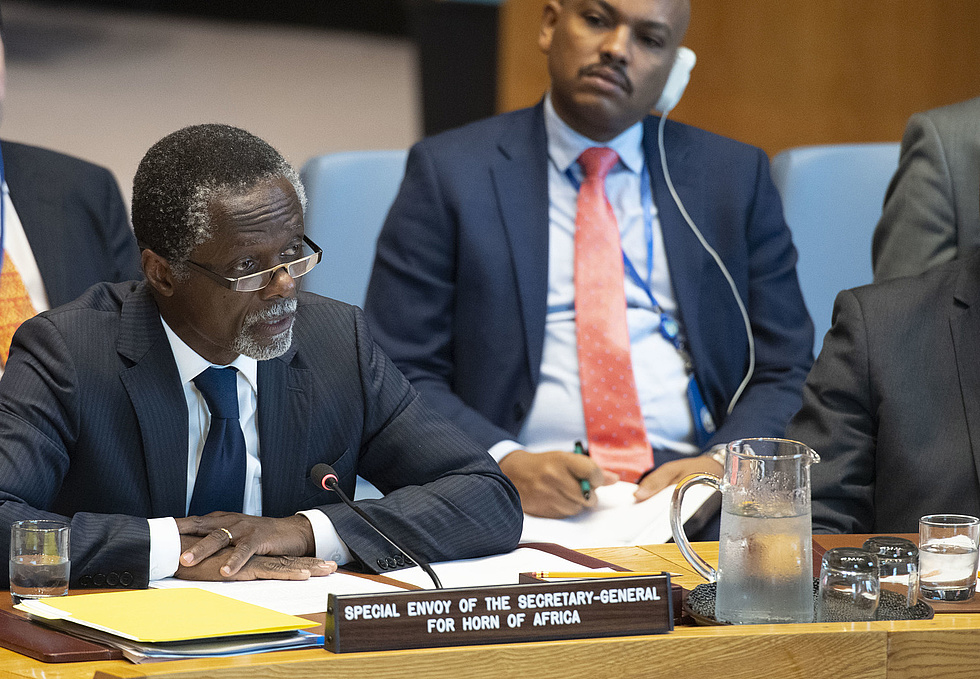 Image: Parfait Onanga-Anyanga of UN Photo/Evan Schneider UN Special Envoy of the Secretary-General for the Horn of Africa at the UN Security Council

The ongoing crisis of multilateralism and the decline of its more predictable, norm-based international security order coincide with fragile political transitions in the Horn of Africa. Despite promising developments, the recent political transitions in Sudan, Ethiopia and South Sudan remain fragile and require sensible, pragmatic, and coordinated support from outside actors along with adequate financial frameworks for peaceful transitions to remain on course. Further challenges are emerging in other countries of the region. Worries about the future security of Somalia have arisen against the background of the planned withdrawal of the peacekeeping mission AMISOM. Additionally, new actors and changing conflict constellations have emerged in several of the countries of the wider Horn of Africa. These ongoing dynamics and challenges potentially change the way peace and collective security can and will be organized in the future.

During the 15th Horn of Africa Dialogue in Nairobi, jointly hosted by the Friedrich-Ebert-Stiftung (FES) and the German Institute for International and Security Affairs (SWP), the guiding question was how to develop collective security mechanisms that consider the fragility of ongoing political transitions and that can address continued challenges in the region. The objective was to develop new ideas on how to embed such mechanisms regionally and continentally against a background of less predictable engagements of a more diverse set of external actors following a more narrow and transactional way of peacemaking. High ranking participants from different countries in the Horn of Africa, experts and representatives of civil society, currently involved in peace processes, representatives of regional organizations such as the Intergovernmental Authority on Development (IGAD) and the African Union (AU), Special Envoys from the United Nations and the European Union to the Horn of Africa and the African Union, representatives of the German government and of the EU delegation in Nairobi as well as the Member of the German Parliament Christoph Matschie came together to discuss these questions. Given the long-established format and trust the Horn of Africa Dialogue enjoys, particularly frank discussions under Chatham House Rule allowed for innovative thinking and new ideas on how to make peace work collectively in the region.

Listen to regional actors and citizens

Participants agreed that a more transactional approach to conflict regulation can be witnessed, given the more diverse security and commercial interests from inside the region, but also from across the Red Sea and the Indian Ocean. In addition, more actors and a more transactional approach towards bilateral and regional relations in the region threaten to undermine existing rules and norms. Against this background, participants agreed that a more inclusive and collective security approach in the region is necessary. The message to external actors from the European Union and its member states was to listen more carefully to regional actors and primarily citizens of the countries in the region, to remain flexible, and to better coordinate their approaches to the region. Additionally, participants from different countries of the region pointed out that outside involvement, especially from the European Union, needs to ensure that citizen driven initiatives are strengthened and that a more coordinated approach to the region reflects democratic values and aspirations coming from citizens in different countries. Close cooperation between regional and continental organizations and the EU remains necessary not only to act when violent conflict has erupted, but also in order to make existing instruments of conflict prevention more effective.

Towards a more peaceful, collective and socially just peace and security policy

The exchange of views and trust building during the 15th Horn of Africa Dialogue allowed for the development of a shared sense of what lies ahead and what is necessary in order to ensure that currently ongoing fragile transitions remain on their promising pathways. The discussions also led to concrete ideas on how continued violent conflicts can be addressed with regard to their root causes in different countries of the region. Given the presence of important political decision makers from inside and outside the region, the 15th Horn of Africa Dialogue once again achieved its objective to inform a more peaceful, collective and socially just peace and security policy.