As a player in global security politics, China is here to stay. A new analysis by the FES explains what this means for arms control dialogue.

The People’s Republic of China (PRC) has abandoned its traditional foreign and security policy restraint and is playing an active role in shaping the global security order of the 21st century. Our most recent analysis shines a spotlight on these changes, concentrating explicitly on China’srole in multilateral arms control. The main focus of the analysis is whether, and if so in which areas, arms control dialogue with Germany and the EU is possible, and indeed worthwhile.

Disarmament and arms control are key components of the global security architecture and require trust between states. Yet, in many regions around the world, this very trust is steadily declining, resulting in a fragile multilateral arms control architecture. Russia’s invasion of Ukraine, too, is highly likely to further hamper the prospects of successful arms control. At the same time, the challenges of international arms control and the international political order —such as those posed by the conflicts in Iran and North Korea—cannot be effectively met without China’s constructive involvement.

In order to facilitate a better understanding of China’s role in multilateral arms control, the Asia-Pacific Department of the Friedrich-Ebert Stiftung (FES) recently published a new analysis entitled China’s Role in Multilateral Arms Control. The report, written by Dr Oliver Meier and Prof. Michael Staack, provides important background information for the much-needed discussion on the principles of Chinese arms control policy and also outlines the options that could result from this for a dialogue on arms control policy with China.

Arms control is impossible without China

Dr Meier and Prof. Staack emphasise that, if the aim is to maintain and advance arms control and the international political order, China must be involved and, indeed, must play an active role. Yet, China continues to actively advance its (re)armament policy and to date has played a somewhat passive role in multilateral arms control.

Here, according to the two authors, Beijing is guided by two key principles. First, the country seeks strategic parity with the US and second, it prohibits any form of interference in its domestic affairs. Beyond this, China’s actions in the areas of disarmament, arms control, and non-proliferation are, however, anything but »consistent«. The authors of the analysis refer to conflicting objectives and a fractured understanding of roles making China’s policy in some areas appear ambivalent or even contradictory. Despite these ambivalences, Beijing is still fundamentally prepared to become more actively involved in arms control policy. This provides a departure point for more intensive arms control dialogue with Germany and Europe.

The increasing involvement of China in arms control regimes can therefore help stabilise the fragile international order. Dr Meier and Prof. Staack recommend more sustained dialogue on issues of verification, as well as confidence and security-building, in order to cultivate dialogue with China on cooperative security. The establishment of channels of communication fosters transparency, empathy, and an understanding of shared interests and, as a result, can help effect longer-term change in political relations. Germany and the EU should take note of the fundamental principles underpinning China’s arms control policy and, where relevant, articulate the differences between these principles and the German and European position. Specificity, flexibility, and a willingness to enter into dialogue can all improve the chances of success of attempts to promote dialogue on arms control policy.

Michael Staack is Professor of Theory and Empiricism of International Relations at Helmut Schmidt University/University of the Federal Armed Forces in Hamburg.

This report is part of a FES publication series, which examines Beijing’s strategy in a range of different global policy fields. The overarching theme of the series is the future of multilateralism in light of China’s rise to world power and the growing competition over the establishment of values and norms. It seeks to address questions such as: How can we go about initiating a constructive process of political negotiation between Europe and China on the regulatory framework for global governance? In which areas is there potential for more coordination and cooperation with China? And, in contrast, where should Europe be taking countermeasures and conducting its own groundwork, for example to ensure that newly industrialised and developing countries see it as a reliable partner? 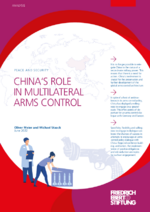 China is a critical component of the global financial architecture as both a member of the international institutions and as an institution-builder.…