Mali was considered to be a model democracy in West Africa for many years. The most recent multi-dimensional crisis has revealed the instability of the country, however. Malian society continues to be preoccupied with the experience of horrific violations of human rights that accompanied the occupation of northern Mali by rebels and Jihadist groupings in 2012/2013 as well as the effects of the military coup d’état that took place in March 2012. At present, Mali is trying to restore stability and come to terms with the causes of the most recent crisis in the implementation of a peace treaty signed in Bamako in May and June of 2015. For the peace and reconciliation process that has been initiated to be a success, it is crucial that the political and institutional reforms agreed upon in the Algiers Accord be implemented quickly and in a credible and reliable manner. Mali returned to a constitutional system as far back as 2013 with presidential and parliamentary elections. In spite of international interventions and a UN peacekeeping mission, insecurity still reigns in some parts of the country, as is demonstrated by fighting between armed groups, criminal organisations and repeated terrorist attacks.

In Mali, among the world's ten poorest countries, key challenges include fostering economic development, combating unemployment and securing the food supply, reform of the educational and judicial systems, fighting corruption and mismanagement.

Active in Mali since 1968, the Friedrich-Ebert-Stiftung (FES) endeavours to support its partners from the fields of policy-making, trade unions, civil society and the media in confronting the numerous challenges facing the country. The FES country office in Bamako works to strengthen Malian democracy and political participation, and to promote freedom of speech, the press and human rights. Above and beyond this, FES activities in Mali address the areas of combating poverty, economic and security policy, reform of the government and good governance.

Find out more on fes-mali.org 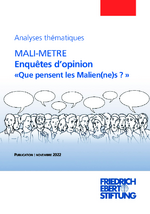 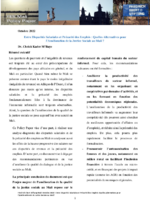 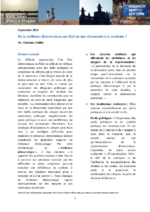 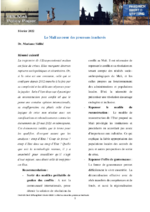