Political framework and situation of the trade unions

In Germany too, despite growth, the distribution is becoming increasingly unequal, the world of work is becoming more diverse, but also more unstable. At the same time, there is a threat of disruption from technical innovation in Industry 4.0, from digitization and artificial intelligence. Here, too, the trade unions must position themselves, both in Germany and in Europe. The platform economy will change the way we work.

The perception of inequality in Europe shapes the image of the people, at the same time most want a fairer and more social Europe. However, parts of the European population now see globalization and Europeanization more as a risk than as an opportunity. Populist and nationalist currents are very popular. The trade unions must also oppose right-wing extremism in Europe.

The central prerequisite for a social Europe are jobs from which people can actually live well. Strong and future-oriented trade unions, in turn, are the best guarantee that competitiveness, social justice and fair income can be reconciled. That is what our trade union dialogue stands for.

German and European trade unions discuss their common understanding and their political demands for overcoming the current crises in Europe.

Trade unions from the G7 countries discuss common positions on the global challenges of climate change, digitalization and crisis management.

Strategic Autonomy for a Social and Sovereign Europe

No Green Deal without a Social Deal 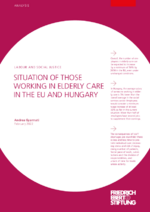 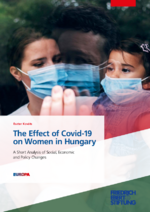 The effect of Covid-19 on women in Hungary

A short analysis of social, economic and policy changes
Budapest, 2022 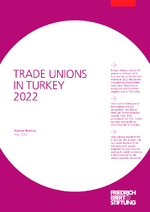 The FES trade union monitor summarizes the framework conditions relevant to trade union policy in the respective country and provides data and facts on the country-specific trade union landscape.

The current monitors you can find here:

The rise of right-wing populist movements and parties throughout Europe is not without consequences for trade unions. In a sequence of short country studies and an analysis based on them, trade union options for action are examined.

The Competence Centre on the Future of Work addresses multidimensional aspects of the work itself by focusing on three thematic pillars: Responsible digitalsiation, New Forms of Work and New Technologies at the work place. For more information about our Centre click here.