Jane Kelsey, professor of law from the University of Auckland and Kinda Mohamadieh from Third World Network have recently published a detailed study on the current reform process of Investor-State Dispute Settlement (ISDS) at UNCITRAL – the United Nations Commission on International Trade Law. In “UNCITRAL fiddles while countries burn” they shed light on an intransparent and unequal process in which the reform is focused “on procedure and not on substance”

Kinda, ISDS has been under attack by a broad public since a couple of years. What is so wrong with this system?

ISDS is an arbitration-based international dispute settlement mechanism exclusively available for foreign investors for the purposes of suing sovereign States. It is built into international investment agreements that were creatures of decolonisation, primarily designed to protect investments of colonial and imperial powers against newly-sovereign developing country States. ISDS has been used to challenge a wide spectrum of regulatory interventions by States, such as  tax reform purposes,  responding to the financial crisis and climate change, and even to the COVID-19 pandemic.

Jane, the EU is proposing a Multilateral Investment Court (MIC). It sounds like an attractive approach. What is wrong with the EU’s idea?

First, it does nothing to address the deeply flawed pro-investor rules in the investment agreements; having a new system to enforce bad rules doesn’t address the problem. A second  problem is that a court system that develops a form of precedent from the many varied clauses in different agreements could lock in bad precedents. Third, any investment court will most likely be located in rich capital-exporting countries, and those considered qualified to become arbitrators are likely to come disproportionately from the global North. Finally, a number of powerful countries, including the US and Japan, will not support a MIC. The system will be as unpredictable and fragmented as it is now.

The impact of ISDS on countries budget is enormous. It seems rather odd that such an important and influential instrument is discussed at a hardly known organization like UNCITRAL. Kinda, why is this discussion taking place under the radar of many policy-makers and civil societies?

UNCITRAL is not a forum where developing countries have traditionally been active as a group. Law in this forum has often been created by a small number of mainly Northern countries, along with extensive participation by professional groups and associations. In the case of the ISDS reform negotiations, two groups of non-State actors- an academic and a practitioners forum- the majority of which are lawyers active in the field of ISDS as counsel or arbitrators, have had a significant influence on the process. Public interest groups constitute a very small fraction of the overall non-State participation in the WGIII-meetings. There have also been some specific interests. One of the main reasons was the EU’s desire to find a multilateral arena in which to pursue the idea of a multilateral investment court.

And how is it ensured that developing countries can participate on an eye-to-eye level?

It requires much more than making travel funds available. The measure must be their ability to make effective contributions to the process, not the number of countries represented. All drafting and other work must be conducted in an open and participatory manner, whereby States must be fully informed about the participation of experts in advising, reviewing and commenting on draft work products.

Jane, in your publication you delineate in great detail why the mandate of the Working Group III,  is too limited  to respond adequately to the systemic concerns of ISDS. What change in the mandate is needed? And how likely is it at this stage?

If UNCITRAL is to discuss these reforms it needs to go back to the debate that led to the Working Group III mandate; the need to address the crisis of legitimacy in the international investment law regime. Matters of substance and process are inseparable, as many developing countries have argued in the Working Group. IUNCITRAL is part of the UN system. The participating states need to put their development responsibilities at the core of their work, not the periphery. 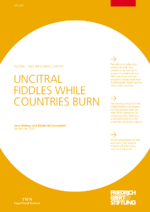