Between 2 and 13 December 2019 the member states of the United Nations Framework Convention on Climate Change will meet for the 25th World Climate Conference (COP25) in Madrid.

COP25 will take place under the official slogan »Time for Action«. This rallying cry is intended to encourage the member states to step up their climate policy ambitions and increase their nationally defined contributions (NDCs).

Concrete progress is expected as regards climate financing and key aspects of the Paris framework, such as Article 6 (designing international cooperation mechanisms), the Warsaw International Mechanism for Loss and Damage and the transparency framework. Furthermore, topics such as the nexus of climate policy and sustainable development, the emerging debate on climate justice and the importance of the oceans will be discussed intensively, also against the background of recent scientific findings, as presented in this year’s two IPCC special reports.

The FES will also be in Spain. We are organising a number of events, briefings and network meetings with our partners on climate and energy policy and supporting voices from the Global South.

The original plan was to hold COP25 in Santiago, Chile, but because of domestic unrest there it was switched to Madrid at short notice. But while the Spanish government is the technical host, the conduct of substantive negotiations still lies with Chile, an arrangement similar to the one at COP23, when Germany was the technical host and Fiji held the COP presidency.

This year we have granted four FES media scholarships and we are delighted that Andrea A. Gálvez from Spain, Kartik Chandramouli from India, Petr Vodsedalek from the Czech Republic and Leopold Obi from Kenya will accompany us to Madrid. They will be looked after by Climate Tracker, receive media training on climate policy, attend our FES events and report on COP25.

And what is going on in Chile in the meantime? Despite the shifting of COP25 the planned alternative summit of social movements and civil society will still take place in Santiago de Chile. Over nine days 100 activities are planned, including lectures, workshops and artistic performances. The FES is also present in Santiago de Chile and will host a number of events.

Here we shall report on negotiations, expectations and assessments.

Gender should be negotiated at the highest level at COP25. But what has happened so far?

Renewable energy as a great opportunity for the Global South: fair, affordable, socially and climate-friendly. What does a just transition look like?

So much to talk about and so many unclarified issues to be negotiated. Why this COP is so important and what we may expect from it. 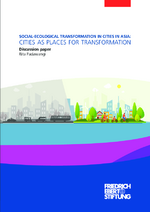 Social-ecological transformation in cities in Asia 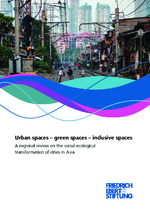 A regional review on the social-ecological transformation of cities in Asia
Hanoi, 2022 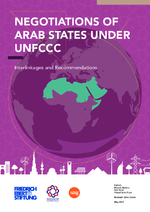 Negotiations of Arab States under UNFCCC