A decade after South Sudan gained independence, a ‘peace dividend’ remains elusive for large parts of the new country’s population. The peace agreement ending the most recent civil war, the Revitalized Agreement on the Resolution of Conflict in South Sudan, signed in Khartoum in 2018, paves the way to the independent republic’s first permanent constitution and the first countrywide general elections. The impact of decades of marginalisation and the far-reaching destruction of economic structures in devastating successive civil wars is still omnipresent. Following a brief phase of economic upswing in the capital city of Juba, power struggles within the governing party, the Sudan People's Liberation Movement (SPLM), escalated in 2013, leading to an outbreak of violence that sparked a civil war with an ethnic dimension, hitting the civil population particularly hard.

South Sudan has yet to forge a new inclusive social contract upon which to chart its path to a prosperous and peaceful future. Inclusive nation-building processes, the task of coming to terms with the violent past and the establishment of civil society and political public are only at the outset. The country still lacks critical political and administrative capacities needed to overcome the enormous political, economic, and social challenges it faces.

The Friedrich-Ebert-Stiftung (FES) is the only German political foundation with a permanent presence in South Sudan and it has been active in Juba since 2008. Its activities focus both on the political elite and non-state actors that are assigned a crucial role in the shaping the political future of the new state. In the political centre of Juba as well as in the regional states, FES supports the work and establishment of civil society and trade union structures, promotes the dialogue between research and policy and offers forums for political participation. Above all, facilitating an internal societal dialogue is of tremendous importance in this fragile situation, as the willingness and capability of this young state to negotiate and accommodate conflicts of interest and claims to participation in a peaceful manner will play a crucial role in its future options and prospects. 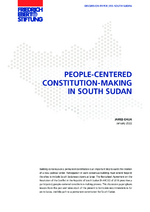 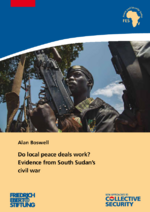 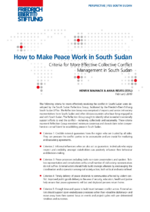 How to make peace work in South Sudan 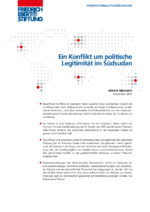 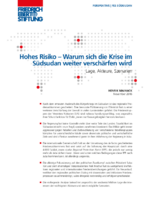