Attorney and FES-Fellow Louis Gitinywa describes the pandemic as a test case for the Rwandan development model. 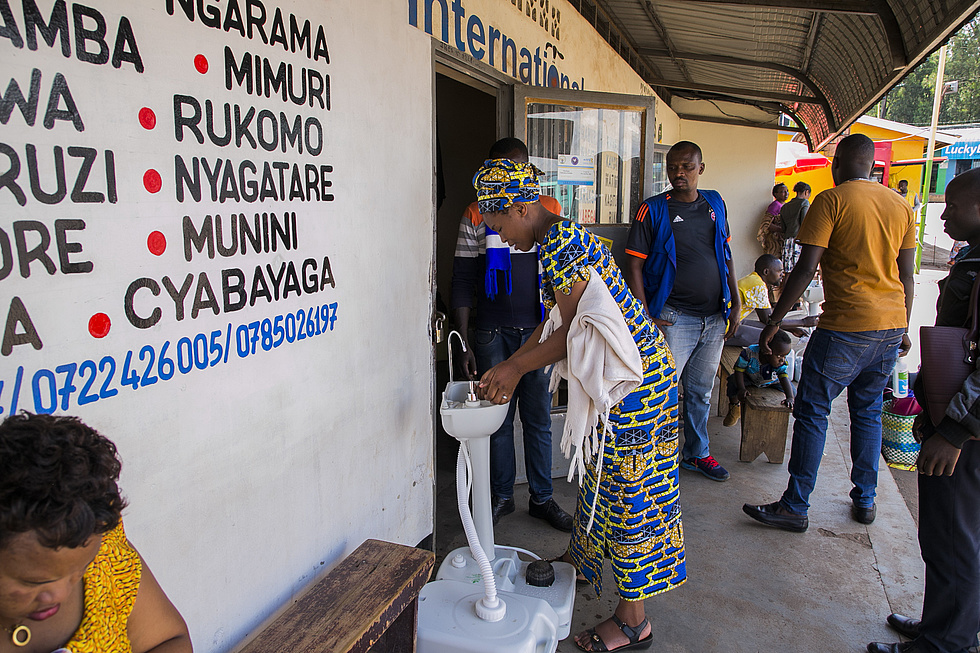 Image: of Cyril Ndegeya Rwanda reacts early and effective: handwashing facility at the bus terminal in Kigali in mid-March.

Following the WHO designation of coronavirus (SARS-CoV-2) as a global pandemic Rwanda as the first country in Africa entered in a phase of confinement. On March 23rd the government ordered a severe lockdown restricting travelling and closing universities to reduce the spread of the virus in the country. As of today, Rwanda has 268 cases and 0 death.

The Rwanda governance model is built on two competing narratives: alongside the story of being a "donor darling" the country is popularly seen as successful example for development in Africa. It is also an authoritarian state based on a tightly centralized economic and political power within the ruling party RPF (Rwandan Patriotic Front) which controls the state security apparatus and owns major enterprises in the country. This governance model has based its legitimacy on rapid socio-economic progress of the country.

Some political commentators rightly suggest using the outbreak as a scale to test the nature and the quality of our institutions. And the obvious place to start is by looking at the strengths and weaknesses of the state machinery and how the power responds to the demands of the people.  Shortly after the government announced a nationwide lockdown, citizens took to social media, more specifically to Rwandans on Twitter (dubbed as RWoT), urging the government to provide emergency food relief for the most vulnerable families and to implement palliative economic measures as soon as possible.

Also, it is important to understand the national context where you do not often see Rwandans publicly criticizing the state; especially on social media because of the regime’s reluctance to tolerate criticism. Often people are afraid to raise their concerns because of state repression and the use of its coercive power.

Though some citizens go far by asking for more transparency over the management of the “Agaciro Fund“ (Agaciro, meaning dignity in Kinyarwanda, is basically a national trust fund); and why the government has not yet allocated some of its own funds for mitigating the socio-economic effects of this crisis rather than asking the World Bank and International Monetary Fund for bailouts and loans?

Citizens draw their inspiration from abroad on how other countries have responded to the economic effects of this crisis. Moreover, it is essential to understand this sudden awakening of citizens especially in a context of a nation where official government views dominate the domestic media, with limited free speech coupled with a very weak civil society.

Even though, the Gross National Product hovered around 7 % during the past decade, most Rwandans, mostly young and the educated, remain poor, jobless and financially insecure. Instead there is a strong and growing expression of citizen’s frustrations, especially in the urban areas towards the official discourse about the country’s development and socio-economic progress.

While East African Community (EAC) member states like Kenya or Uganda have already announced economic stimulus packages to deal with the devasting economic impact of the virus outbreak, on its part, Rwanda is yet to announce a comprehensive economic mitigation strategy to assist businesses and the private sector in dealing with the economic effects of this crisis.

Even a month after the implementation of the lockdown order the government has been mute over citizen’s demand for food relief support; especially about the controversies that have emerged in local media suggesting that authorities have giving out so little or insufficient support for the vulnerable families.

Interestingly this crisis has shed light on the growing political frictions within the government, given the recent sackings of the Minister of Interior and Security, General Patrick Nyamvumba, and the Minister of State in the Ministry of Foreign Affairs and East African Cooperation, Ambassador Oliver Nduhungirehe. It seems that this turmoil illustrates the absence of a clear government’s strategy to deal with this crisis. Today it appears that through this pandemic, the myth of an organized and efficient state is being shattered.

With this pandemic crisis, questions arise about the maturity and legitimacy of our governance model. Whether or not an authoritarian model of development is effective at absorbing social inequalities and conflicts? Despite its hegemony, the current political model remains vulnerable and in the light of the growing frustration of a population already suffering from hardship, unemployment and poverty, it is clear that the regime’s reluctance to tolerate criticism may undermine the longevity of its model.

The full disruptive potential of the Coronavirus crisis will take months, if not years to reveal itself. In the meantime, if you are anxious about all this, then it might be worth thinking about how this outbreak could eventually change our society for the better.

Louis Gitinywa is an Attorney & Legal consultant based in Kigali, Rwanda, and fellow of the 2019 CEU and Friedrich-Ebert-Stiftung’s Constitution Building Summer School. His contact email is: tatabo2010(at)gmail.com