Hans-Joachim Preuss from FES Benin calls for greater cooperation between African states in order to use their own knowledge and resources to combat pandemics in future. 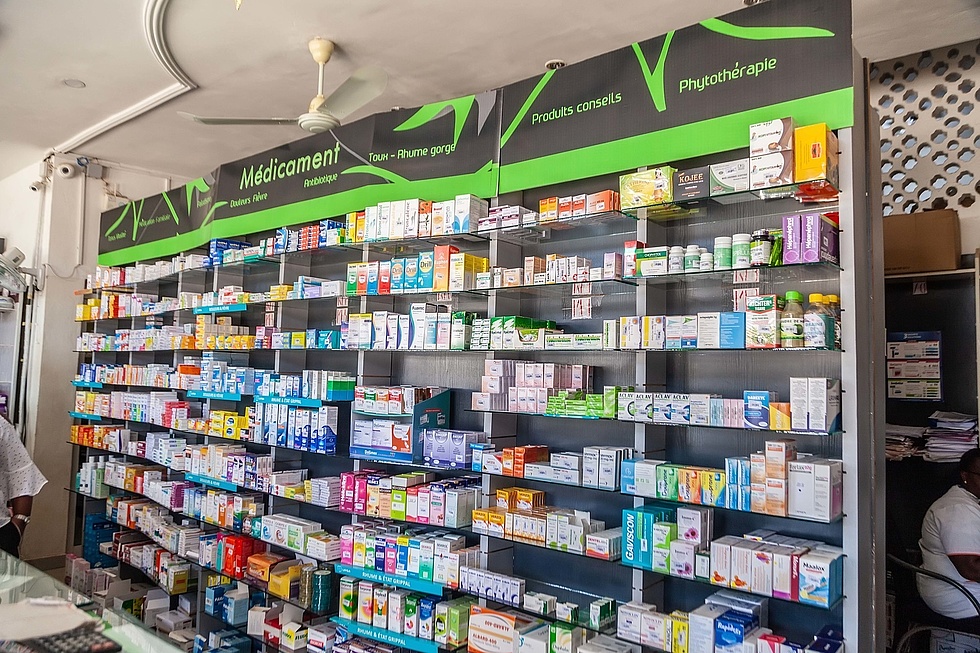 Image: of Salomon Djidjoho Between 70 and 80 percent of all medicines in Africa worth 11.5 billion dollars are imported from overseas.

Two years ago, Marvel landed a worldwide box office hit with his superhero epic "Black Panther". In Africa, the cinemas were full of young and middle-aged people who immediately identified with the main character T'Challa or the emancipated Amazons Shuri, Okoye, and Nakia from the land of Wakanda surrounding him. The viewers were drawn into a future Africa, an Africa that surpasses all other countries technologically, militarily and intellectually. A stark contrast to the Africa that is still considered by the rest of the world as the tail end of progress. Many young Africans, according to the comments in the continent's gazettes, would like to get rid of this stigma and show what the black continent has in store. The film serves this longing extensively.

So, when a few weeks ago Madagascan President Andry Rajoelina presented the magic potion Covid-Organics, which is based on the plant Artemisia, there was great interest from many African countries. And this was not only because many governments, despite the few infections in global comparison, do not have sufficient treatment options and reach for every straw to treat the disease. Rather, it was emphasized that - like a small Gaulish village that once resisted the Romans alone - "poor Africa" now defied the disease brought in from the industrialized countries with a self-developed drug from their "open-air pharmacy". No wonder that orders were hailing from everywhere. Guinea-Bissau, Equatorial Guinea, and Niger were the first recipients; other countries like Tanzania, Congo, and Senegal were waiting impatiently for their allocation. Rajoelina has promised to build a pharmaceutical factory within a month to meet the growing demand.

Artemisia (Artemisia annua L.), the raw material for the miracle cure, has been used for thousands of years in traditional Chinese medicine and 50 years in the medicine of African countries against inflammation, malaria, and other diseases. In most cases, the active ingredient artemisinin is obtained by infusion from the leaves of the herb. Artemisia tea is also offered in Benin as a preventive and curative remedy against malaria. However, it tastes so bitter that many refuse to take it. Covid-Organics, therefore, contains the calorie-free sweetener stevia, which is extracted from the local "sweet herb" (Stevia rabaudiana Bertoni).

In Madagascar, which was little affected by the pandemic at the beginning, Covid-Organics is being used extensively in schoolchildren ten days after its public launch and four weeks after a test on about 20 people who were ill. Nevertheless, the number of infections is currently rising sharply. Critics who describe this field experiment as premature are accused by the president of being "enemies of the state" who are standing in the way of progress. Although he admits that there have not yet been any clinical tests proving the efficacy of Artemisia against Covid-19, he sees himself and his country wrongly denounced by the World Health Organization (WHO), which currently still advises caution in the use of the magic potion. According to him, it is not a question of seriousness, but humiliating Africa once again. "If it had not been Madagascar but a European country that discovered this cure, would there be so many doubts? I do not believe so!", Rajoelina scolded reporters from Radio France Internationale.

Support for his position can be found above all in the continent's social media. Other heads of government, on the other hand, are trying a combination of different means than relying solely on Covid-Organics. The most common remedy is (hydroxy)chloroquine, which was used against malaria in the 1980s and 1990s before most pathogens became immune to the drug. Apivirin, which was developed by a Beninese researcher against HIV-AIDS, was also tested in Burkina Faso, but after initial euphoria was rejected as unsuitable. The researcher now accuses his home country of having instigated an international conspiracy against his product, which he has celebrated as a miracle drug.

The WHO, which had already investigated and proven the efficacy of pharmaceutically produced artemisinin in malaria diseases before the corona pandemic, warns against using locally produced drugs of any origin because, on the one hand, the active substance content varies considerably and, on the other hand, they only partially eliminate the pathogens and thus promote resistance. And - in agreement with researchers all around the world - they call for clinical tests to be carried out before a drug is used.

In general, one cannot accuse the WHO of not appreciating traditional medicine. On the contrary, it encourages countries to make more intensive use of traditional medicine for the benefit of public health - albeit following medically recognized principles and procedures.

Many African intellectuals hope that an original African solution to the pandemic can be found on the African continent. For too long they have been dependent on medicines from abroad. International pharmaceutical companies used African medicinal plants to process and patent active ingredients. However, the establishment of a separate industry and the development of drugs based on traditional remedies will require greater regional and continental cooperation, as hardly any African country has the economies of scale necessary for competitive production. In the words of T'Challa, the "Black Panther" from Wakanda: "We all know the truth: more connects us than separates us. But in times of crisis the wise build bridges, while the foolish build barriers. We must find a way to look after one another, as if we were one single tribe."

Perhaps South Africa's response is the most sensible: Although the country is very much affected by the pandemic, it is currently refusing to use Covid-Organics. At the same time, however, it is providing Madagascar with scientific expertise and laboratories to study the effectiveness of the magic potion. A good example of inner-African cooperation.

Hans-Joachim Preuss from Cotonou, Benin is the resident representative of the Friedrich-Ebert-Stiftung for Benin, Burkina Faso and Togo and co-coordinator of this blog.