Too Big To Fail-financial firms play a crucial role in the chronic net outflow of financial resources from the global south to the global north. Shows a new study by Finance Watch and FES.

In the aftermath of the Great Financial Crisis, there was a wide consensus that too-big-to-fail banks were the root cause of financial instability. We already knew at the time that the G20 financial reform agenda of 2009 would not solve all problems, but few would have thought that too-big-to-manage, too-complex-to-supervise and too-powerful-to-rein-in financial institutions would be seen as the solution to the world’s problems just a few years down the road

In recent years, developing countries have increasingly engaged with private financial systems dominated by giant, oligopolistic, transnational financial firms - also known as too-big-to-fail (TBTF) firms. The size and corresponding market power of too-big-to-fail financial firms allow them to influence the development finance agenda and amplify and encourage forms of finance suited to their profits but not the needs of developing countries. They thus contribute to a chronic net outflow of financial resources from peripheral countries to the capitalist core in developed countries.

To better understand these phenomena, Finance Watch and Friedrich-Ebert-Stiftung published a study by Duncan Lindo titled Too big to fail: Still a problem – A look at development finance. Lindo’s work links debates on development finance to dynamics of the international financial system dominated by TBTF firms, as opposed to mainstream development economics, which focuses mainly on practices in developing countries. He outlines three main ways in which TBTF-based finance amplifies and reinforces existing channels of financial outflows from developing countries: external debt, foreign reserve accumulation, and illicit financial flows and tax avoidance schemes.

Firstly, developing countries’ external debt has been rising sharply. Since the 2007-2008 financial crisis, private debt has increased relative to other forms of debt. It is overwhelmingly issued, distributed and held by TBTF financial firms be they investment banks or institutional investors – and it is typically more expensive than bilateral or multilateral debt. When TBTF financial firms dominate it is their business model which largely determines which projects are funded and in which form. Obviously, they favor large, standardized and market-oriented financing, which is not necessarily in line with the needs and welfare of developing countries. Currently, the only solution to the problem of over-indebtedness is debt reduction, including debt restructuring and debt forgiveness. However, this approach does not adequately address the underlying structural problem, which is the absence of sound, publicly financed monetary systems to generate funds at a domestic level.

Last but not least, illicit financial flows and tax evasion schemes play an important role in the appropriation of financial resources from developing countries. TBTF financial firms act as facilitators and enablers, setting up and transferring money between international subsidiaries and branches of their own and other financial firms. They also actively lobby for rule changes and develop new innovative financial instruments that allow the legal avoidance of tax.

The position of the TBTF financial firms in TBTF-based finance gives them great scope to shift the rules of the game in their favor. They are able to influence the »common sense« of finance, for example through funding university programs. Their power is thus applied through conditionality of lending programs, through trade agreements, through the use of credit rating agencies, and through a myriad of other ways in which international political pressure is applied. Developing countries are then left with little choice but to adopt globalized, market-based norms in a form of extra-territorial regulation. So what should or could be done? TBTF financial firms are overwhelmingly based in the Global North and it is here that we must look for policy change that could improve the situation for ordinary people in developing countries and in the capitalist core. 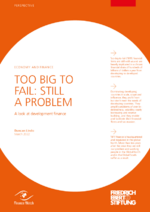 Too big to fail

Still a problem ; a look at development finance
Bonn, 2022

Three experts in the field of sovereign debt in a video interview with the FES and erlassjahr.de.

China is a critical component of the global financial architecture as both a member of the international institutions and as an institution-builder.…

‘Africa can achieve more if it will speak with one voice‘