What role does home-based work play in global supply chains?

Homeworkers produce goods, or parts of goods, from their homes. They work for supply chains in many different industries. The International Labour Organization (ILO) estimates that there are 49 million homeworkers. But this excludes dependent contractors who say they are self-employed.  A survey of 340 garment factories in two Indian cities showed that 58 percent of surveyed factories outsource to homeworkers.

From the perspective of factories, homeworkers help factories to cope with fluctuating demand; they have specialist skills (like embroidery, which is difficult to do in factories); and they enable factories to reduce costs: the cost of space, electricity, and equipment. Also, because their work is unregulated, factories pay homeworkers less than factory workers.

How are homeworkers’ rights protected?

In most developing countries, homeworkers have no rights because legally they are classified as independent contractors. Thailand has legislation to protect homeworkers, but employers have threatened to move production to Myanmar if the legislation is enforced. Thus, this is not something that can be solved at national level only.

Are homeworkers pushing for employment in factories, and if not, why not?

Most homeworkers are women and they want to work from home. They simply want their labour rights (set out in the ILO Home Work Convention 177) to be respected. They have four reasons for wanting brands to protect rather than prohibit homework: First, factories do not hire older workers. For example, Thai factories purportedly do not hire workers over 40 years of age, Indonesian factories force people over 50 to resign, and the average worker in Vietnamese factories is 25 years old. This quote (from a study by Mark Anner) captures the intensity of work in export factories: ‘We are like sugarcane to them [the factory owners]. Once they squeeze out all the liquid, they throw us out.’ Prohibiting homework would exclude men and women over 40 from the labour market. Second, cultural and religious norms prevent many women from working outside the home.  Homework allows them to work. Third, homework enables villagers to access work. Contractors bring the raw materials to villages and collect the finished good. Last, they can work while caring for children, grandchildren, and elderly and sick relatives.

How can EU Due Diligence Laws protect homeworkers?

First, legislation must cover all workers in all tiers of the chain, irrespective of their employment status. This is important because all workers’ human rights should be respected. But it is important for another reason. A Cornell University study of five sectors found that suppliers typically have one factory that complies with codes of conduct, and subcontracts to other non-compliant factories. Studies show that legislation that does not cover all workers incentivizes informalization, which means some workers pay the price of safeguarding the rights of other workers.

Second, workers cannot complain if they do not know the name of the brand for whom they produce. Factories hide this information and threaten homeworkers and their families if they or their organisations try to find out. Legislation should therefore include a transparency provision that makes it mandatory for enterprises to contractually oblige their suppliers to provide every worker in their supply chain with a contract that includes the names of the brands for whom they work.

Fourteen organisations of homeworkers from nine countries addressed the question of how legislation might include homeworkers in their platform of demands submitted to the EU Commission. The OECD Due Diligence Guidance for Responsible Chains in the Garment and Footwear Sector and Australia’s supply chain regime illustrate how to include homeworkers. One way is for enterprises to contractually oblige their suppliers to ensure that subcontractors keep a register of contracted homeworkers, with copies of individual contracts. National legislation by EU member states could create a statutory duty to this effect.

What role can “Worker Driven Due Diligence” play?

It is widely documented that social auditing has failed to protect workers. Worker-driven due diligence is an alternative. It means that workers and their organisations are involved in every aspect of supply chain governance: the design of legislation meant to protect them; the complaints and grievance mechanisms; and remediation processes. Workers are uniquely positioned to know how their human and labour rights are violated.

Further information on this topic can be found in the following publication: SUPPLY CHAINGOVERNANCE: Arguments for worker-driven enforcement 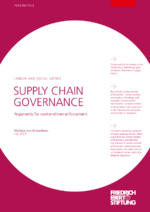