Community-based refugee sponsorship in Europe is still in its infancy. A new pilot project in Spain could attract more attention.

At a time when migration movements continue to increase and acceptance of newcomers is under pressure, innovative concepts are in desperate need. Private sponsorship programs can be a solution. The concept is essentially a public-private partnership between a government which facilitates legal admission for refugees and private actors who take the role of a financial sponsor. Those actors then serve as a social link to the host society. The main aim is to provide a comprehensive support in integrating refugees into a local community – with flexible consideration of the local context.

Canada as a role model

While Canada developed a successful model over 40 years, Europe’s approaches are still in its infancy. Nevertheless, a yet small, but growing number of already existing initiatives has emerged in the last years. Those include the humanitarian corridors in Italy and France, the community-based sponsorship programme in the UK, and the private sponsorship programme supported by relatives in Germany and Ireland. The Netherlands, Slovakia and Poland also showed interest in developing their own programmes.

This year, Germany and Spain started implementing new pilots. Germany launched the NesT (“Neustart im Team”, or “a team for starting over") initiative in which at least five mentors from the civil society are responsible for one refugee. This includes takes such as finding a place to live but also paying the rent for two years. NesT aims to resettle 500 vulnerable refugees. The first arrivals are expected for after the summer.

Spain is well on track

With regards to the timetable, Spain is further along. Already in March, the country welcomed 29 refugees from Syria in the three Basque cities, Bilbao, Donostia and Vitoria. So far, according to testimonies from local groups, the first experiences in Spain are very promising. The power of local community groups for the bottom-up integration of refugees seems to be making a valuable difference. Yet, the number of cases is still too small to detect a new trend. An evaluation of the current experiences will be decisive in whether other EU-members want to follow or upgrade existing initiatives.

To read more on the Spanish case: In a guest article for the FES Cristina Manzanedo, an expert on migration and asylum in Spain, analyses the current development “Community-based refugee sponsorship in Spain: What are the experiences?” 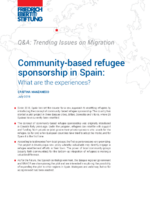 What are the experiences?
Budapest, 2019