The Manifesto gathers the aspirations of citizens from the Western Balkans and channels key recommendations on how to shape a forward-looking Europe.

The Conference on the Future of Europe opened an opportunity for European citizens and civil society to have a say on how to reform the European Union (EU) and prepare it for new challenges. The proliferation of crises over the past ten years have put the European project to the test. Socio-economic inequalities, national populism, and neo-authoritarianism have undermined the ideational foundations of European unification. Democracy in Europe is declining, and the outburst of the COVID-19 pandemic has further exacerbated the sense of fragility of the Union. This fact needs to be addressed by forging a robust vision for the future of Europe that inspires citizens and broaden their horizon. The outbreak of the war in Ukraine is a watershed moment in the history of the Continent, which the Union needs to face with resolve and strategic determination. This Manifesto includes recommendations on how to shape a forward-looking Europe that looks beyond immediate threats and resolvedly sets its course amidst mushrooming challenges. It is a contribution from the Western Balkans to the grands débats on the future of Europe. As a region in Europe, the Western Balkans not only share the Union’s present challenges, they also share a common future, and as such, a responsibility towards the European project. 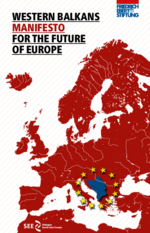 Western Balkans manifesto for the future of Europe