Brexit poses a risk for European Security as the highly institutionalised relations based on EU membership change. This new publication analyses the security cooperation between Germany, France and the United Kingdom after Brexit.

In the last few decades, we have become accustomed to the fact that foreign and security policy are very much in flux and that there is no discernible status quo any more. The series of supposed watershed moments, from 9/11 through to the Arab Spring, the Crimea Annexation all the way to the more recent tendency of the US to turn their back on international agreements and institutions, is commonly acknowledged. In spite of all this, there may still be a certain logic in talking about a status quo, at least in the security and defence policy triangle between France, Germany and the UK. A similar set of threats and challenges, a deep and highly institutionalised set of relations based not only in the common membership in the European Union, but also NATO, OSCE and UN as well as common initiatives like the E3 in Iran form a stable web of trust and cooperative reflexes between these states. At least, this was the case before Brexit happened and old certainties seemed to vanish and trust has been lost. The question that is now looming is, how do we proceed from here?

Both sides will lose in this process. While the EU will lose some of its military and diplomatic influence, the UK will miss the benefits of concertation and joint action with its European neighbours. It is therefore in the interest of both parties to maintain strong links and to set up a special relationship on foreign and security policy. This is important for the EU and NATO level, but especially so for the workings of smaller and more informal alliances like the E3, a setting of trilateral relations between the UK, France and Germany.

The paper provides us with a few ideas that could inform the political debate in all three countries in the coming years. We wish you an interesting and informative reading! 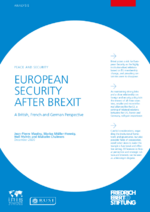