According to the author of this study, Bodo Weber, countries along migration routes continue to block incoming migrants, sometimes violently, but the EU has done little about it.

Image: An Afghan refugee walks towards the Idomeni transit station where more than 10,000 refugees and migrants remain despite the closure of the so-called Western Balkan Route of © UNHCR/Achilleas Zavallis

FES: In the title of your paper you mention a “Balkan route that is not quite closed.” What does that mean, specifically?

Bodo Weber: The Balkan route has been considered closed since March of 2016 because of the deal between the EU and Turkey and the official closure of the border between Greece and Macedonia and of the other borders along the route. It is true that, since then, refugees and migrants no longer have been able to leave the Greek islands for the mainland and continue their journey from there. Nevertheless, thousands and probably tens of thousands keep coming to Europe and into the EU along the Balkan route every year. And by now, relying on the help of smugglers, they are making the journey primarily via the Turkish-Bulgarian land border, just as they did prior to the so-called European refugee crisis. This is happening despite massive countermeasures as well as systematic, often violent pushbacks on the borders along the route and changes in asylum laws in some countries, especially Hungary. All of these measures violate national, EU, and international law.

What effects has the closure of the Balkan route had on non-EU countries along the way such as Macedonia and Serbia, and on the refugees who are now arriving there?

Since the effort to close the Balkan route completely has been more “successful” at its northern terminus in Hungary and Croatia than at its southern entry-point, Macedonia and Serbia have gotten entangled in the politics of their neighbors who are members of the EU. As a result, the flow of EU-bound refugees has backed up. Approximately 10,000 refugees and migrants are now stranded in Serbia. Confronted by this dilemma, both countries, you might say, have been compelled to copy the policies of their EU neighbors: i.e., to adopt legally dubious changes in asylum law and imitate those countries' pushback practices. Ironically, these two non-EU countries are the only ones along the Balkan route in which such reactions have not been accompanied by violence.

As time goes on, fewer and fewer refugees are arriving in central Europe. Is that due to the closing of the Balkan route or to the deal with Turkey?

What had been a meaningless—because politically motivated—“either-or” debate on this issue has begun to abate since last year. In my opinion a combination of factors has caused the decline in refugee numbers. One of them is indeed the deal with Turkey; another is the redoubled effort to close the Balkan route completely, as we have noted. Another important factor, not an official part of the deal but implicit in it anyway, has been overlooked in public debates: the decision by Syria's neighbors to close their borders with that country. Turkey has even built a wall there. It is unprecedented for refugees from a civil war to be, in effect, penned up in their own country. When the war in Bosnia began in 1992, the immediate reaction of the Kohl government was to impose a visa requirement on Bosnians. But they, at least, could still flee into neighboring countries (from which many more were still able to reach Germany than initially suited that era’s government). Whether the three billion euros in financial aid allotted to the three million Syrians in Turkey also has played a role is hard to tell. The uncertainty here is due to the fact that Germany and other EU countries pledged to Turkey that they would take in 150,000-250,000 Syrians as soon as the number of refugees in the Aegean had declined substantially. That is indeed the case since May of 2016, yet ever since then Berlin and the other capitals have been acting as though they had never made any such pledge. Meanwhile, interestingly enough, over the past half-year Ankara has refrained from insisting that the German government and the EU make good on their promise.

Because Hungary, Poland, and the Czech Republic refuse to admit enough refugees to comply with the terms of the EU's 2015 relocation plan, the European Commission has initiated a breach of contract proceeding against those countries. Why has the EU Commission been so reluctant to take such a step until now, even though it has known for some time that human rights violations have occurred?

Recently, the Commission initiated a breach of contract proceeding against the three countries because they flatly refused to accept refugees in accordance with the September, 2015, relocation formula which, though controversial, is still legally binding beyond any shadow of a doubt. Presumably, Brussels waited so long in the hope that EU member states finally would reach an agreement about the internal distribution of asylum-seekers within the Union. Be that as it may, the initiation of the proceedings barely three months before the formula is scheduled to expire makes it seem more like a piece of political symbolism than a measure with serious practical consequences. Anyway, by this time the formula is pretty much a dead letter, because nearly all of the member states have dragged their feet in carrying out their pledges to admit refugees.

As far as breaches of contract in respect to human rights are concerned, the case of Hungary is much more interesting. At the end of 2015 the Commission instituted a proceeding against Budapest. It was provoked by Hungary's decision to toughen its laws on the granting of asylum in the summer of 2015, a measure that also was accompanied by the closure of the borders with Serbia and Croatia and the construction of border fences. Yet at first this proceeding did not go anywhere. Not until May 17, 2017, did the Commission revive its suit while simultaneously filing a second, more broadly conceived breach of contract action. The latter is also aimed at the drastic further tightening of Hungarian asylum law that has occurred since 2015, especially the most recent amendments to the law passed in March of 2017. Whether this legal proceeding is the consequence of the dramatically increased tensions between Brussels and Budapest in recent months, or whether a mood swing in the chancellor's office in Berlin is responsible for it, is still unclear. In any case the massive human rights violations taking place in Bulgaria and Croatia have not yet resulted in any legal proceedings at all. 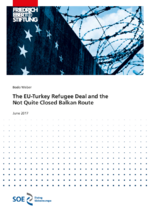 How the so-called fight against causes of displacement undermines the principles of development cooperation.

What “Return to Dublin” Means for Greece

EU member states want to start sending refugees back to Greece – a reason for the government not to improve the country’s asylum system.

Betrayed and Sold? Turkish and Greek Perspectives on the EU-Turkey Deal

One year after the Refugee Deal, Turkey and Greece feel abandoned. FES employees report from the ground.