Worries about terrorism continue to distort views of migration

A majority of the respondents connect migration with an increased risk of terror attacks. Between 79% (France) and 90% (Great Britain) of the respondents agreed with the statement, “Among the many migrants who come to Europe, there are also potential terrorists.” Consequently, most of them are in favor of reinstating border controls in the EU and thus doing away with the Schengen Agreement. Only Polish respondents preferred to keep the Agreement intact.

In France, pollsters noted an exceptionally critical attitude toward immigrants. The images people held of new and already-settled immigrants were often driven by fear, which is a major obstacle in the way of their willingness to take in more migrants. Accordingly, the first, spontaneously uttered words of French respondents to the survey usually bore negative connotations. The most frequently mentioned terms were: “insecurity/criminality,” “problem,” and “misery.”

It has become clear that this negative attitude is directed not just at newly-arrived refugees, but is based on the perception of shortcomings in previous efforts to integrate migrants. Only 29% of respondents in France believe that earlier migrants are well-integrated. On this question older people are more critical than younger ones—only 23% of respondents over 65 think that people with a migratory background are well-integrated, versus 34% of respondents under the age of 35. Likewise, blue collar workers and low-level white collar employees take a more hardline view of previous integration efforts than do better-off salaried employees (24% to 36%). Not surprisingly, the supporters of Fillon and Le Pen (18%) take a more negative position than do those who back Macron (41%) and Mélonchon (43%).

It is not simply that more than 70% of French respondents think that people with a migratory background are poorly integrated into French society; rather, in attempting to explain the failure of those efforts, they cite reasons that pin the blame squarely on the migrants themselves rather than on France’s misguided integration policies. French respondents name mastery of the language and common cultural reference points as the basic prerequisites for successful integration. Paradoxically, it is those who tend to see integration as fairly successful, and not the more critical respondents, who advocate enhanced integration efforts in those areas.

You can find the results of the survey, summarized by Jérôme Fourquet, in the publication “Europe and Immigration: The perception of migration in Europe and the ideas associated with it in France.”

Contacts in the Friedrich Ebert Stiftung;

How has public opinion on immigration evolved in specific European countries? One survey, commissioned jointly by the Jean-Jaurès Foundation and the Friedrich Ebert Stiftung, and carried out by the public opinion research institute Ifop, interviewed people on that question in four countries: France, Germany, Great Britain, and Poland.

A growing number of respondents in all four countries expressed confidence that migration will continue, primarily for economic reasons. The European public is becoming aware that migrants probably will keep arriving in Europe for some time to come, driven by “structural” factors, or at least that the ebb and flow of migrants will be a recurrent phenomenon. In addition, a majority of respondents in most of the countries assume that the newcomers will be permanent residents rather than transients. That was the view stated by 60% in France, 59% in Great Britain, and 55% in Germany.

There are differences in citizens’ current willingness to take in migrants. It is higher in Germany than in France and Britain, and far higher than in Poland. As might be expected, then, Germany is the only country in which a majority approves of the proposal to accept migrants in the framework of an EU-wide formula for distributing them throughout the member states. To be sure, in Germany the number of those saying that the country has reached the limits of its capacity to absorb and integrate migrants increased from 33% in September, 2015, to 49% two years later. 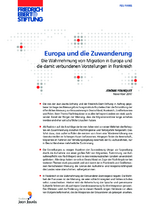