Is there a connection between the electoral defeats suffered by social democratic parties and the rise of radical right-wing parties in Western Europe?

One frequent explanation for this is that social democratic parties have lost their working-class voters to extreme right-wing parties. The causes cited for this phenomenon include, first of all, a shift in social democratic parties to the right in terms of economic policy (the "third way") while at the same time these parties have adopted a more leftist stance along the cultural dimension ("identity politics").

Experimental and survey data indicate that potential social democratic voters prefer old-left and new-left programs to centrist and left-nationalist strategies. The most promising way forward for social democratic parties, according to the authors, is a combination of old-left and new-left strategies, both based on their analysis and in view of the dilemmas facing these parties.

Cas Mudde is Stanley Wade Shelton UGAF Professor in International Affairs and Distinguished University Professor at the University of Georgia (US), and Professor II at the Center for Research on Extremism (C-REX) at the University of Oslo (Norway). Most recently, he published The Far Right Today (2019) and Populism: A Very Short Introduction (2017; co-authored with Cristóbal Rovira Kaltwasser).

Tarik Abou-Chadi is Assistant Professor at the Institute of Political Science at the University of Zurich and at the Aarau Centre for Democracy. His research concentrates on elections and political competition in developed democracies. He has published numerous works on social democracy, the radical right and green parties.

Reto Mitteregger received his Bachelor's and Master's degrees from the University of Zurich and is a doctoral candidate and assistant at the Institute of Political Science at the University of Zurich. He is collaborating on the research project "European social democracy and the trade-offs of party competition in post-industrial societies". 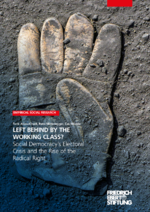 Left behind by the working class?

Social democracy's electoral crisis and the rise of the radical right
Berlin, 2021