Why transit camps must be abolished and are not suited to serve as models for Centers for Arrival, Decision, and Return (AnKER-centers). 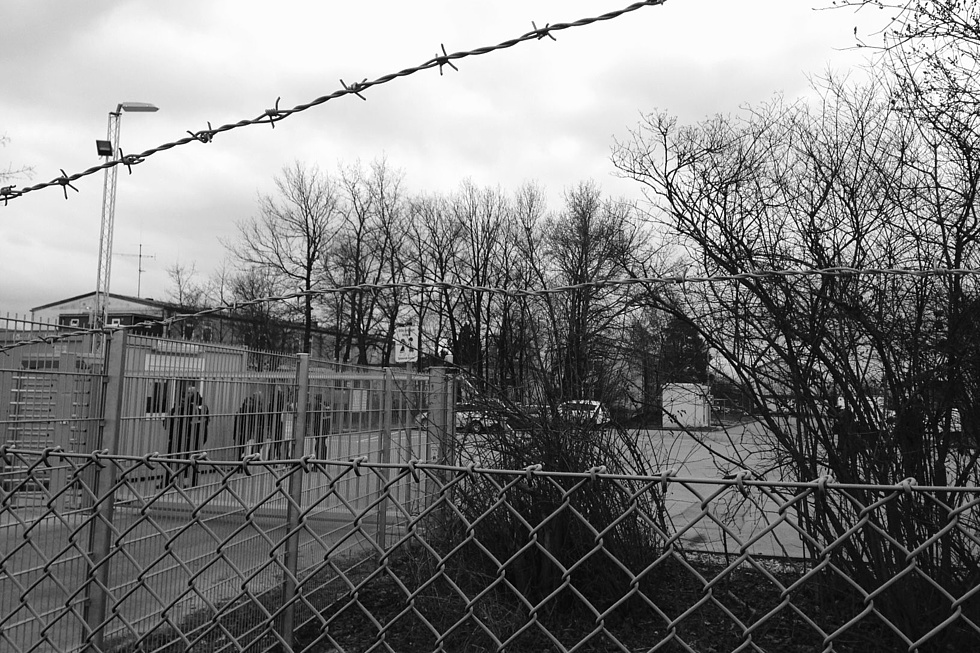 As early as the autumn of 2015, large camps for refugees were set up in Manching/Ingolstadt and Bamberg, all known as “Arrival and Repatriation Institutions” (German ARE). Originally, these institutions were intended to house only people coming from “secure” countries of origin in Southeastern Europe, but the targeted group was quickly expanded.

By this time, asylum-seekers from Afghanistan, Ethiopia, and Nigeria also have been housed in such institutions (called “transit centers” since 2017) in Manching/Ingolstadt and two other new facilities in Regensburg and Deggendorf. Contrary to promises of speeded-up proceedings proffered by politicians, what awaits them there is a long list of problems ranging from sometimes-illegal restrictions and unfair asylum proceedings, to violent assaults by security personnel.

For the inmates, life in the transit camps is hedged in by controls. Whereas adults can neither work nor start vocational training, children are supposed to be educated in “camp schools” that offer only so-called transitional instruction; that is, a language course designed to prepare them for ordinary classroom education. To be sure, asylum-seekers are allowed to leave the camp, but they are subject to rigorous roll-call and entry/exit checks and are required to live in the camps (mandatory residence). In addition, volunteers and consultative organizations either are excluded from the premises altogether or allowed in only after meeting strict requirements. Under these circumstances, asylum-seekers for the most part are cut off from the outside world.

Transit camps are set up in such a way that the entire asylum proceeding can take place on site. But due to numerous controls and restrictions, asylum-seekers rarely have access to legal counsel. Both the Central Bureau for Aliens, a field office of the Federal Office for Migration and Refugees, and a branch of the responsible Administrative Court are there on the grounds of the camp, with the latter offering the opportunity to appeal an adverse decision. Yet it is next to impossible for refugees to get independent advice. One reason for this is that the Federal Office for Migration and Refugees holds its hearings shortly after a person has been assigned to a camp. It is often the case that this short time frame alone rules out any opportunity for consultation about the proceedings. Only two camps, those in Ingolstadt and Bamberg, have a lawyer on the premises. Because of the restrictions on their movements, those interned often cannot avail themselves of other kinds of legal aid. From the very outset, conditions for a fair asylum proceeding have not been met.

Furthermore, the rights of refugees in the centers are repeatedly violated and so must be defended by legal actions in court. For instance, after a Dublin verdict has been handed down, the cash grants of inmates often are canceled illegally. Of course, people need that money for various purposes such as buying additional food for their children when they cannot tolerate the canteen fare. But more importantly, without money they cannot afford to be represented by an attorney. Only after seven separate lawsuits did the Bamberg Social Welfare Office give in and resume paying cash grants.

Similarly, it took intervention by the courts to enable children who already speak German to attend a regular school. Those legal proceedings are only possible because volunteers and associates of the Bavarian Refugee Council continue to seek contact with the inmates, in spite of all the harassment, to find out what is happening in the camps.

In addition, tensions are noticeably growing between refugees and security employees in the transit centers. Investigations are pending against employees of a security firm in Bamberg for violent assaults and bodily harm. In Manching/Ingolstadt refugees are regularly intimidated during checks of their rooms or at gates and in the cafeteria. They have no chance to defend themselves. The police are summoned nearly every day due to conflicts between the inmates and security or administrative officials.

Conflicts also arise due to harsh deportation practices by the police

These tensions also may be interpreted as the outcome of extensive intimidation of the people in the camps. Frequent attempts are made to deport people during the night. Besides deportations to countries of origin, there are also—in fact most commonly—deportations under the rules of Dublin III. Nighttime police raids terrify all the residents. In Ingolstadt the refugees have even instituted a night watch that issues warnings when the police come. Many residents’ nerves are frazzled by these police operations. Their children, too, live in a never-ending state of alarm. In this kind of environment conflicts can escalate readily.

These circumstances inside the camps are matched by rising tensions with the neighborhood. The large camps incite prejudice and racism in adjoining residential areas.

Conclusion: Proceedings will not be speeded up; instead there will be segregation and deterrence

When one looks at the Bavarian transit centers, one cannot suppress the suspicion that their purpose is not so much to accelerate legal proceedings but rather to segregate and deter asylum seekers. In fact, those proceedings take just as long in the centers as they do in other accommodations for refugees. Furthermore, quite a few of the inmates run away from the centers, thus losing their legal status, or else they move on to other EU countries. And those who do stick it out in the centers, and are finally issued positive asylum rulings after months of waiting and are thus entitled to move out of the camps, will not receive any support. In many cases, even those recognized as legitimate asylum-seekers still spend months in the camp. Schools and businesses so far have raved about the refugees’ enthusiasm and willingness to learn. Their praise has the ring of truth when one considers the kinds of experiences that the refugees underwent in the camps.

Dr. Stephan Dűnnwald works for the Bavarian Refugee Council and is an associate in the Workshop for the Study of Migration and Border Regimes.

Syrian refugees in Lebanon often live in tent camps, with no official refugee status. NGOs, government and donors are advocating for education.